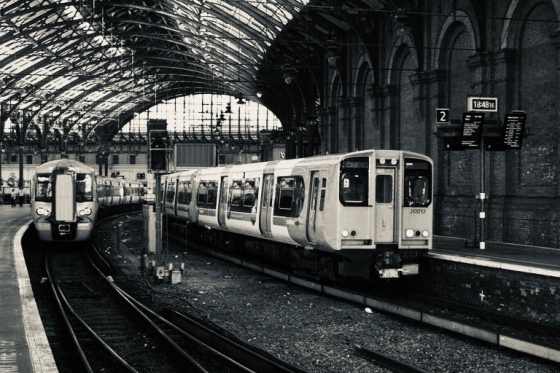 I loathe using public transport; trains especially. This mainly relates to my hatred of being within 20 feet of any human that I haven’t strictly vetted the hygiene levels, standards of spelling and grammar and views on BREXIT of. Yet on trains, strangers and their uncharted social skills are forced upon you.

If you travel during morning rush hour, you will find ‘commuter extraordinaire’ who is often a woman. She has bagged a seat with a table, her tiny, shiny laptop is out, she has a soy latte from Costa and a mobile phone to her ear. She’s making calls, she’s setting up appointments, she’s typing emails, she’s pretty much done a days work before 7.30am. I am in awe of this woman but I also hate her for making me feel so inferior.

If I’m on a commuter train that means it is early in the morning, my stomach will be grumbling because there is no reasonable way that I got up early enough for breakfast. I won’t have spoken to anyone, so if I tried to make any telephone calls my voice would still be asleep and I’d sound like Barry White’s Mum, plus I’d mistime the call so it would connect when the train went through a tunnel and I’d be this person:

My laptop is about 25 years old and roughly the size of a four person train table so if I got my laptop out, I’d either nearly knock someone out trying to get the damn giant thing out of my equally giant laptop bag or I’d swamp the table with my laptop leaving no space for anyone else to put their breakfast muffin down.

Outside of rush hour, if you find yourself travelling on an empty train, it is quite likely that you will encounter a random dude who just stands in the vestibule right in front of the train door. He will, without fail, be listening to music on big over ear headphones. Unfortunately you will only encounter this chap when you stand up to leave your train. You will assume, incorrectly, that the only reason he’s two inches away from the exit is because he’s planning on departing the train at the next station where you also plan to alight. But he won’t be leaving the train and you will only realise this when he doesn’t press the button to open the door and yet continues to block your way out.

*I am not a drama queen

Doorway dude will be oblivious to all of this, if anything, he will look slightly perturbed that the crazy individual sashaying around him requires the use of the exit, ruining the flow of his ‘listening to music on a train’ experience.

Now, although you find people who play music on trains or watch telly without headphones, these people will generally be whipped into shape by either a conductor or another fellow passenger quite promptly. There is another category of noisy traveller who, in my humble opinion, is worse than the first two. This is the individual who is quiet and polite UNTIL they get their phone out and start texting with keyboard clicks enabled, resulting in every text sounding like fucking Riverdance. Why would you do this? Never mind the CIA using music torture to obtain top secret information, sit me next to a clicky texter and you’ll have my PIN number, my salary, the number of people I’ve slept with and my online banking password by the time they’ve finished typing their first message.

If you travel outside of rush hour, you may also come into contact with the lesser spotted ‘bewildered traveller’. You’ll usually find them getting off the bottom of an escalator and immediately stopping as they don’t know where to go and it doesn’t occur to them that they are about to be responsible for a human pile up as people attempt not to charge into the back of them. Often they look like they haven’t been on a train since they were powered by coal and will always ask someone “does this train go to *insert destination that automatic train voice has just announced that the train will be calling at*”.

However, none of these challenging travel companions are as bad as the worst offender of all; the seat thief. Don’t get me wrong, if I’m on an empty train, I may well place my bag on the seat next to me. However, as a responsible and courteous traveller when we get to a station where new passengers might require seats, I will move my bag. Some people do not do this. These people are complete fucktards.

Other passengers will be standing in the train aisles clinging onto overhead handrails that require far more core strength than you ever realise. They will be squashed together, closer to strangers than they’ve been to their spouse since Christmas 2018 following the unprecedented mulled wine incident and yet ‘Captain couple of seats’ feels that their bag containing work files/holiday clothes/mint imperials/Cinzano Rosso/porno mags/ (delete as appropriate) needs it’s very own seat.

Notwithstanding the challenges of your fellow travellers, every aspect of train travel is overly complicated. I can’t just buy a ticket from Brighton to London, I need to know if I’m buying an anytime ticket, a first class ticket, an off peak ticket, a super off peak ticket, a single, a standard return, a cheap day return, an all day travelcard, a group saver ticket. Do I have a railcard? If so is it a family and friends card, a two together card, a network railcard. Will I travel with one specific train operator or do I want to be able to travel on any train that gets me to my destination?…

WHY IS IT SO COMPLICATED?

I just want to pop up to Oxford Street in London on a Saturday to do a spot of shopping without needing a PhD in rail ticketing.

When you’ve eventually purchased the correct ticket, worked out the best train to catch, planned your journey and you’re feeling smug and confident, rail operators have a splendid way of ruining this for you.

It’s a special little game I like to call ‘station scrap sweepstake’ this will either involve the train that you’ve planned to take being scrapped completely: “We are sorry to announce that the 15.42 to Brighton has been cancelled, fuck you all”. I mean, to give them their dues, they don’t actually say the “fuck you all” bit, but it’s heavily implied.

If you’re lucky you might get a rail replacement service meaning that a journey that would take an hour on a train takes about a fortnight by bus so at least you get to maximise your extortionately expensive public transport experience in a value for money kind of way.

The final opportunity to triumph in ‘station scrap sweepstake’ is the most audacious. If this happens to you, you are automatically crowned sweepstake winner:

You get on a train heading for Brighton, but you want to get off at a small station right by your house just outside Brighton called Preston Park. You get on the slow train, the one that stops at all the piddly little stations. Half way through your journey, the train stops suddenly and doesn’t move for quite a while. Then, you hear the following announcement “Good afternoon ladies and gentlemen, we are sorry to announce that we are experiencing some weather and also some daylight. Unfortunately some night time is likely shortly so we be held at a red light for some time which will delay our journey. As such, this train will no longer call at Preston Park station, thank you for travelling with this shoddy enterprise. Fuck. You. All”

If you've found this site on purpose, you're probably my mum or dad.

If you've stumbled here by accident, you are most welcome. Don't rush off. Stay a while, have a cup of tea and a little read of my blog. It will definitely be better than working*

*unless your job involves looking after kittens or testing cake in which case, get back to work, there is nothing for you here.

What I’ve been writing about recently:

Let’s go back in time…Posts from the past:

Pick a category, any category: